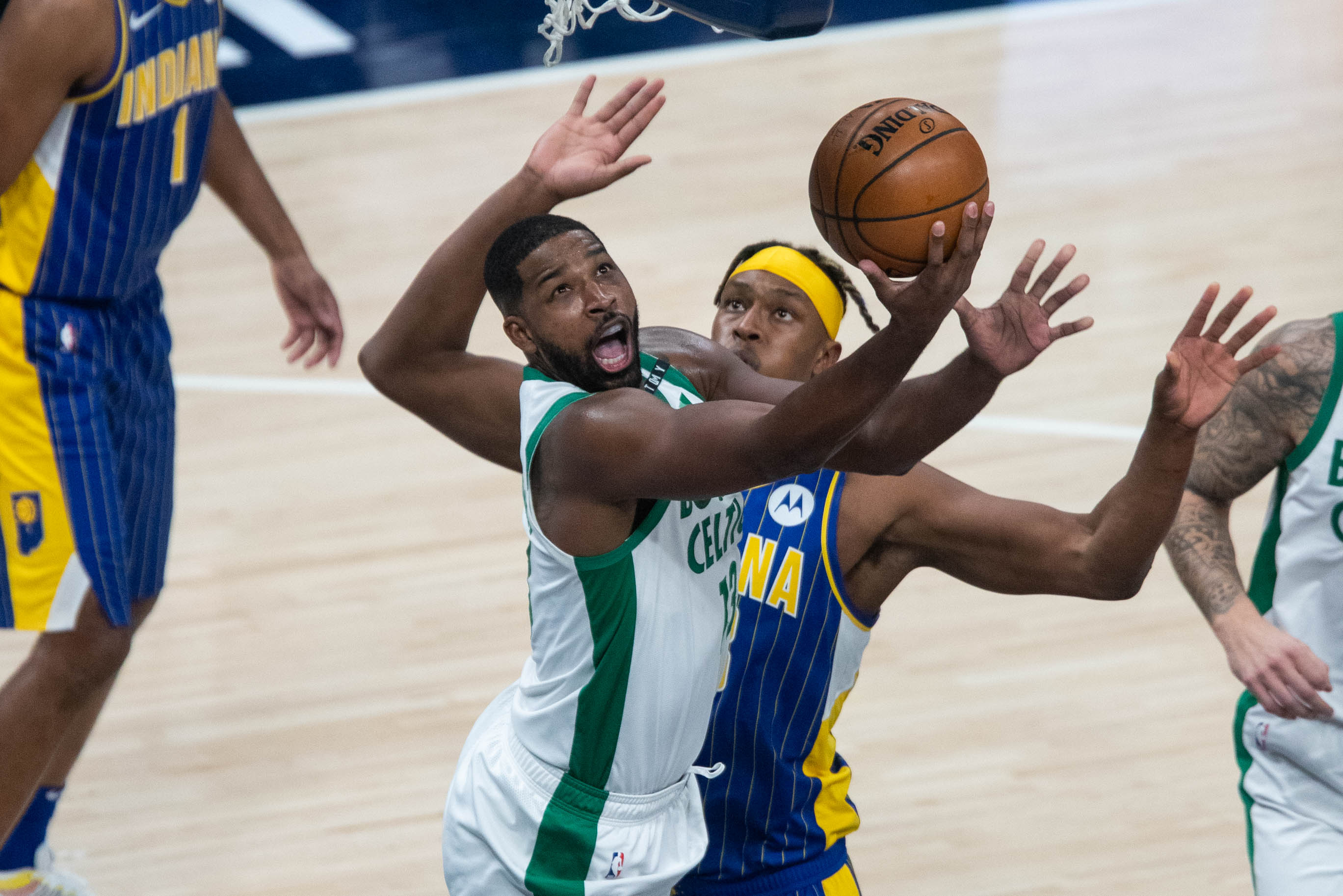 The Boston Celtics were back inside Bankers Life Fieldhouse in Indianapolis on Tuesday afternoon, getting ready for a rematch after losing to the Indiana Pacers by 1 on Sunday night.

This both little and a lot to take out of three regular season games from the Celtics. If you focus on the process of team growth, there is a lot of information to be gleaned from this rollercoaster. Every player has shown there are things that need improving. It’d be easier to list things that they do well than the things they don’t.

However, because of that, there’s little to take away when we look at the results. They beat a contender on opening night, got blown out by another two nights later, and then went back-and-forth with an expected playoff team.

“The hardest part for me right now is gauging if (the start of last night’s game) is more who we are or is the start of the third quarter more who we are, because they are two totally different stories,” Brad Stevens said after practice. “We’ve got to be the best version of ourselves quickly. I was hopeful that lineup would be very good defensively. I’m still hopeful of that. With that said, we have to have everything on the table because we playing such a tough schedule and it doesn’t stop.”

One thing Boston is leaning on is the double-big starting lineup that includes Daniel Theis and Tristan Thompson. The question Stevens is trying to figure out now is whether they can get the necessary defense out of that tandem without impacting the spacing on the offensive end.

“I thought we spaced really well with those guys at the start of the game. The first six-to-eight minutes, we were playing really well offensively, we were generating good looks,” Stevens said. “They had a nice awareness too of when to roll, when to cut, how to space the floor for our guards, a couple of things we were trying to do a little bit differently than in the past with those guys. I thought we did that really well.”

The question now for Boston is why things take such sharp turns so quickly.

“They came out with a different sense of urgency. We just didn’t match it,” Smart said of the third quarter debacle. “We finally did and they were already in a rhythm, and by that time, in this league when guys get in a rhythm like they did last night it’s really tough to come back and really swing the momentum back. I thought we did a good job trying to get it back, but we can’t put ourselves in that situation.”

The obvious question here is ‘why?’ Why do the Celtics so consistently have stretches where a switch flips off and the team looks so lethargic. Stevens sidestepped the question after the game, but admitted Monday that it exists.

“We just looked a step slow, whether it was on the offensive end when we got caught in traffic or on the defensive end where we didn’t react to threats enough,” Stevens said. “I thought we played really well for a lot of yesterday’s game but clearly the third quarter was what beat us.” This is a good team, you are not going to play perfect or keep them from scoring every time down the floor. I hope that we can play more like we did in the other three quarters tomorrow.”

Payton Pritchard was prepared for this

Rookies have it rough this season with the short NBA turnaround. They’ve been robbed of months of development time and are now forced to cram for daily tests as they try to navigate their way through the highest level of basketball in the world.

So it’s impressive any time a rookie can excel at all. Pritchard’s 13 points on 5-for-5 shooting night was a big part of why Boston was able to stay close while Malcolm Brogdon and the Pacers were trying to pull away.

“I feel like I’m getting more comfortable out there. Getting into more of a rhythm,” he said Monday. “Hopefully I can just continue that and help my team where I can and create a punch off the bench and stuff like that.”

Pritchard has hit seven of his last 10 shots and four of his last seven 3-pointers, so the comfort level seems to be getting there quickly. While he is a rookie, it’s also important to note that he was a four-year college player and is still two months older than Jayson Tatum, so he’s had time to grow into big moments.

“I got better every year in college. Everybody has a different path that they go whenever they are ready, whenever they think they are ready,” he said. “For me, I was ready to go after my senior year and come in and play right away. So, I think throughout college it wasn’t like I stayed the same. I got better each and every year, and I want to continue to do that now in the pros.”

Pritchard is going to have some serious swings in the NBA. His highs can be pretty high and his lows will look pretty low, but he won’t let his emotions follow that same path.

“Just going into it knowing there’s going to be ups and downs this year, I’m mentally prepared for that. It’s part of the process,” Pritchard said. I went through it in high school, started as a freshman and then I did it again in college. Same thing. Sometimes you go through these ups and downs as you’re learning how to contribute on a new team and find your way. So I’m kind of mentally prepared for that, and it’s part of the process.”

A defense in transition

The Celtics transition defense has been pretty terrible. It was similarly bad last night but, unlike some other performances, the Celtics were able to apply a tourniquet to the bleeding.

“I would say that we started so bad transition defense-wise in the Brooklyn preseason game, and in the Milwaukee game at home, that we had nowhere to go but up,” Stevens said. “If you’re asking if it’s better – it’s way better. Is it good enough? No.”

Unlike those past games where the Celtics were letting teams run off simple missed jump shots, yesterday’s issue was also a function of being too sloppy.

“Some of our issues yesterday – there were only a couple of issues off made field goals or field goal attempts. It was mostly off turnovers, and/or things we need to clean up on offense,” Stevens said. “It’s hard to guard a turnover. That’s when people get run out, that’s when people get opportunities. You saw that with us. Both teams probably got six or eight points off of turnovers that were uncontested at the rim. Those are points that you can’t allow against a really good team, and that you’re dying to get against a really good team.”

The Celtics are giving up a league worst 76.7% shooting from less than 5 feet, and that certainly isn’t coming in half court sets. Teams are running out and getting clean layups. They’re going to have to clean that up quickly if they want to start adding some more games to the win column.