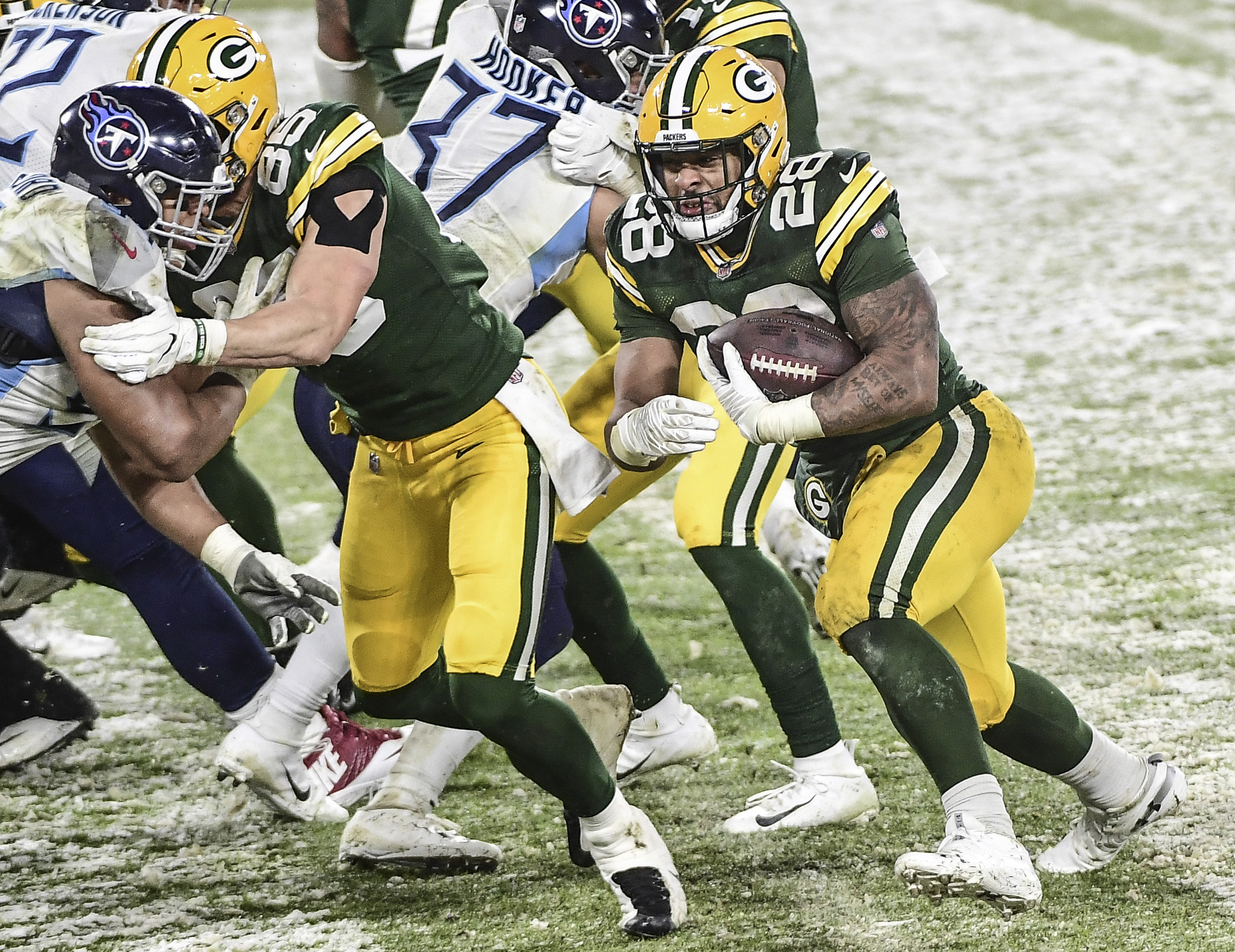 The Green Bay Packers selected running back A.J. Dillon in the second round of the 2020 NFL Draft. As a rookie, Dillon was third on the Packers depth chart behind starter Aaron Jones and primary backup Jamaal Williams. But this season, Williams will be in Detroit after signing with the Lions as a free agent. So, what does this mean for Dillon in 2021?

In 2020, Dillon dealt with a lot of issues. Like all rookies, he had to take the field without the benefit of a normal offseason because of the Covid-19 pandemic. There were no in-person OTAs and no preseason games. Training camp was shorter than usual and there were fewer live reps than a typical season.

During the season, Dillon came down with Covid-19 and was unable to play in several games. Upon his return, the Boston College alum tweeted:

Happy to be back out there… remember Covid hits everyone differently! I’ll be the posterboy for it’s no joke! I appreciate all the support throughout the process. https://t.co/LJSWfOcy0j

During the season, Dillon carried the ball 46 times for 242 yards and two touchdowns. That’s a healthy 5.3-yards per carry. He was on the field for 97 offensive snaps or roughly nine percent of the Packers offensive plays.

Dillon played in 11 games total but carried more than five times in just one contest, the Packers 40-14 thumping of the Titans in Week 16 in Green Bay. In that game, Dillon carried 21 times for 124 yards and scored twice, outplaying Tennessee’s Derrick Henry.

With Jamaal Williams now in Detroit, Dillon figures to move up to the second spot on the running back depth chart. That means he will likely step into Williams’ role or something similar. In 14 games last year, Williams was on the field for 40 percent of the Packers offensive snaps. He carried the ball 119 times for 505 yards and caught 31 passes for 236 more yards.

The key for Dillon to take things to the next level is not his running ability. Nobody questions that the 6’, 248-pound runner can carry the football. He has unusual speed for a man of his size and can run over people because of his thick thighs and big build.

But for Dillon to get on the field as often or more often than Williams did, he’ll have to do some of the other things that Packers head coach Matt LaFleur demands of his running backs. That means catching passes out of the backfield, something Dillon wasn’t called on to do very often in college. Last year with the Pack, Dillon caught two passes for 21 yards. He’ll need to show he can consistently contribute in the passing game to see the field more often.

More importantly, Dillon will have to show that he can pass protect. The Packers offense, like most of the teams in the NFL, passes the ball more often than they run it. In addition, keeping Aaron Rodgers (or whoever the Packers start at quarterback) upright and healthy is vital to the success of the team.

Dillon will need to show he can pick up blitzes, block incoming linemen and linebackers and give Packers quarterbacks the time they need to complete passes downfield. If he can do that, he will get plenty of chances to be on the field in all situations.

Because of his size and the difficulty defenders will have in stopping him, expect the Packers to turn to Dillon frequently in short-yardage and goal line situations. If the Packers need a yard or two, Dillon is the mostly likely candidate to get the ball.

There is little doubt Dillon has been working this offseason. Video surfaced last week of him squashing a watermelon between his thighs. The size and strength of his thighs have earned Dillon the nickname, “Quadzilla.”

He is preparing for the new season, a season full of new chances and new opportunities.

Aaron Jones, who is presently number one on the depth chart, also has an injury history. The Packers tend to pace him because of his smaller size and don’t want him to get too much work and wear him down late in the season. If Jones misses time, that will likely give Dillon even more chances to play.

This is a key season in the development of A.J. Dillon. He can build on his limited reps from his rookie season and move from the periphery of the Packers offense to being a steady contributor in it. And, if he works hard and plays his cards right, Dillon can even become a bigger part of the Packers attack, something that team certainly envisioned when they drafted him a year ago.