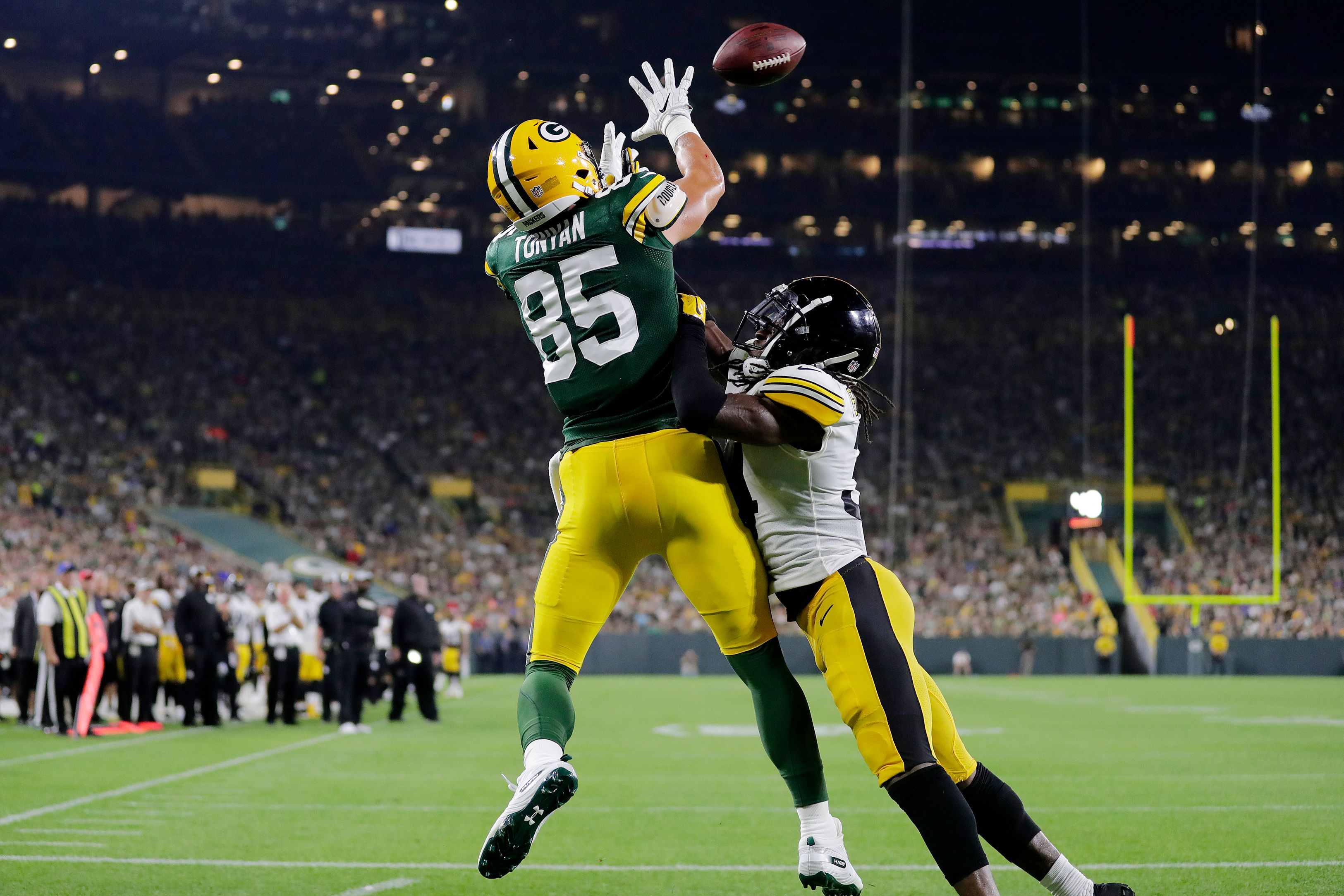 The Green Bay Packers return home for a Week 4 battle with the Pittsburgh Steelers. The Packers enter the game with a 2-1 record and are in first place in the NFC North after last week’s dramatic, last minute 30-28 road win over the 49ers. The Steelers are 1-2 and have now lost two straight games including last week’s disappointing 24-10 loss at home against the Bengals.  This is the Packers first game this season against an AFC opponent.

The Packers hold an 18-16-0 advantage all-time in a series that started in 1933 when the Pittsburgh team was known as the Pirates. The Packers won the only postseason meeting between those two teams when they defeated Pittsburgh 31-25 in Super Bowl XLV. Pittsburgh has won the last five regular-season meetings between the clubs with the Packers last victory coming back in 1995.

Here is a look at six key factors that will determine who wins Sunday’s game in Green Bay:

The Pittsburgh defense has five sacks through three games. Three of those sacks belong to T.J. Watt who has already missed one game due to a groin injury. He has been limited in practice so far this week and it is not clear whether Watt will be able to play and if he does, how effective he will be at getting to the quarterback. If he’s healthy, he’s tough to stop.

The Packers offensive line came through with a gutsy performance last week despite injuries and a lack of experience. Four of the five starters last week had three or fewer NFL starts in their careers yet they only allowed one sack to a strong San Francisco front seven.

The status of left tackle Elgton Jenkins is still unknown. Jenkins has an ankle injury that kept him out of last week’s game. He has yet to practice this week and the Packers have said they will rest him as much as possible and try to get him ready to face the Steelers on Sunday.

Yosh Nijman came in and did a solid job at left tackle after a shaky start, but the Packers also helped him with quick releases and tight ends or backs helping to reinforce the left side of the line.

Matt LaFleur will have to continue to call plays that allow the Packers to get the ball away quickly and cover up the potential vulnerability of this inexperienced but well coached offensive line.

The Steelers offense has struggled in part due to issues with the running game which enters this contest dead last in the league while averaging just 53-yards per game on the ground.

Rookie Najee Harris has 40 of the team’s 50 overall rushing attempts and backup Benny Snell has carried only twice for one yard.

Harris is talented but the Steelers offensive line has struggled to open holes and the former Alabama star is averaging a paltry 3.1-yards per carry.

Packers nose tackle Kenny Clark had a very strong game against the 49ers and needs to continue to play dominant football in the middle of the Green Bay defensive line.

If the Packers can keep the Steelers running game from being productive, they can make Pittsburgh’s offense one dimensional and set up the pass rush.

The Steelers passing game has struggled to get the ball downfield due to a combination of poor pass protection and Ben Roethlisberger’s inability to get the ball longer passes at this stage of his career.

Running back Najee Harris has been the team’s top receiver as “Big Ben” has concentrated on shorter and safer passes. Harris has 20 catches in three games for 149 yards and a touchdown.

Chase Claypool has been the team’s top wide receiver thus far with 15 catches while Diontae Johnson and JuJu Smith-Schuster close behind with 14 and 13 respectively. Johnson is averaging just 10.1-yards per catch and Smith-Schuster just 9.1. This group is talented despite their lack of early season production.

The Packers secondary will have to clamp down on the Steelers short passing game confident that Roethlisberger won’t be able to beat them deep consistently.

The Packers passing game was effective against San Francisco but Aaron Rodgers focused heavily on top target Davante Adams. Rodgers was credited with 31 targets and 18 of them went to Adams. The next highest player was Marquez Valdes-Scantling with four. This worked well last week but is not a sustainable model long term.

The Pittsburgh pass defense has been mediocre and is ranked 20th in the league in yards allowed per game. The Packers need to spread the ball around a bit more and get other receives involved in the passing game while still giving Adams his touches.

Valdes-Scantling did not practice mid-week due to a hamstring injury and his status remains up in the air. That may mean more opportunities for Allen Lazard, Randall Cobb and Robert Tonyan. Don’t be surprised to see the Packers throw a lot to their running backs as both Aaron Jones and A.J. Dillon have proven to be weapons catching passes out of the backfield.

If the Packers do turn to quick passes, they need to spread the ball around and keep the Steelers defense guessing.

When the Packers offense runs the ball enough, they usually win. Jones has been limited at practice this week due to an ankle injury. The Packers need him ready to go on Sunday as his outside running game could be effective.

If Jones is limited or unable to play, Dillon and Kylin Hill will get the bulk of the work.

Pittsburgh has a good rushing defense and is ranked 10th in the league by allowing only 88.3-yards per game. Despite losing two of their three games, their defense has been able to limit opponents’ rushing games.

The Packers don’t need to gain 150 yards on the ground as a team. They just need to keep the Pittsburgh defense honest and off balance and make them honor the play action passing game. If they do that, they can keep moving the ball on the ground and the offense will likely be able to move the ball effectively.

The Pittsburgh offensive line has struggled this season, allowing eight sacks through three games. In his prime, Roethlisberger was able to evade the rush a bit and his size made him tough to bring down. He is less able to scramble out of trouble at 39 then he was a decade ago.

Unfortunately for the Steelers, their offensive line has struggled with injuries and consistency thus far this season.

Left tackle Chukwuma Okorafor has not practiced this week due to a concussion. If he is unavailable, that gives the Packers an even better chance to get pressure on Roethlisberger.

After a poor performance in Week 1, the Green Bay pass rush has picked up over the last game and a half. Barry has done a good job of mixing up his blitz packages and Rashan Gary and Preston Smith have led the way as the Packers were consistently in the face of Jimmy Garoppolo for much of last Sunday night’s contest.

If the Packers can get pressure on the Steelers quarterback, they can force turnovers and further limit the effectiveness of an already struggling Pittsburgh passing attack.

Before the season started, this game looked much tougher than it does now. The Packers cannot afford to suffer a letdown after their emotional win Sunday night in San Francisco and they cannot afford to underestimate a Steelers team that is better than their slow start indicates.

The Packers defense should be able limit the Pittsburgh attack and even if the offense stumbles a bit, they should find a way to score enough points to win this game at home.