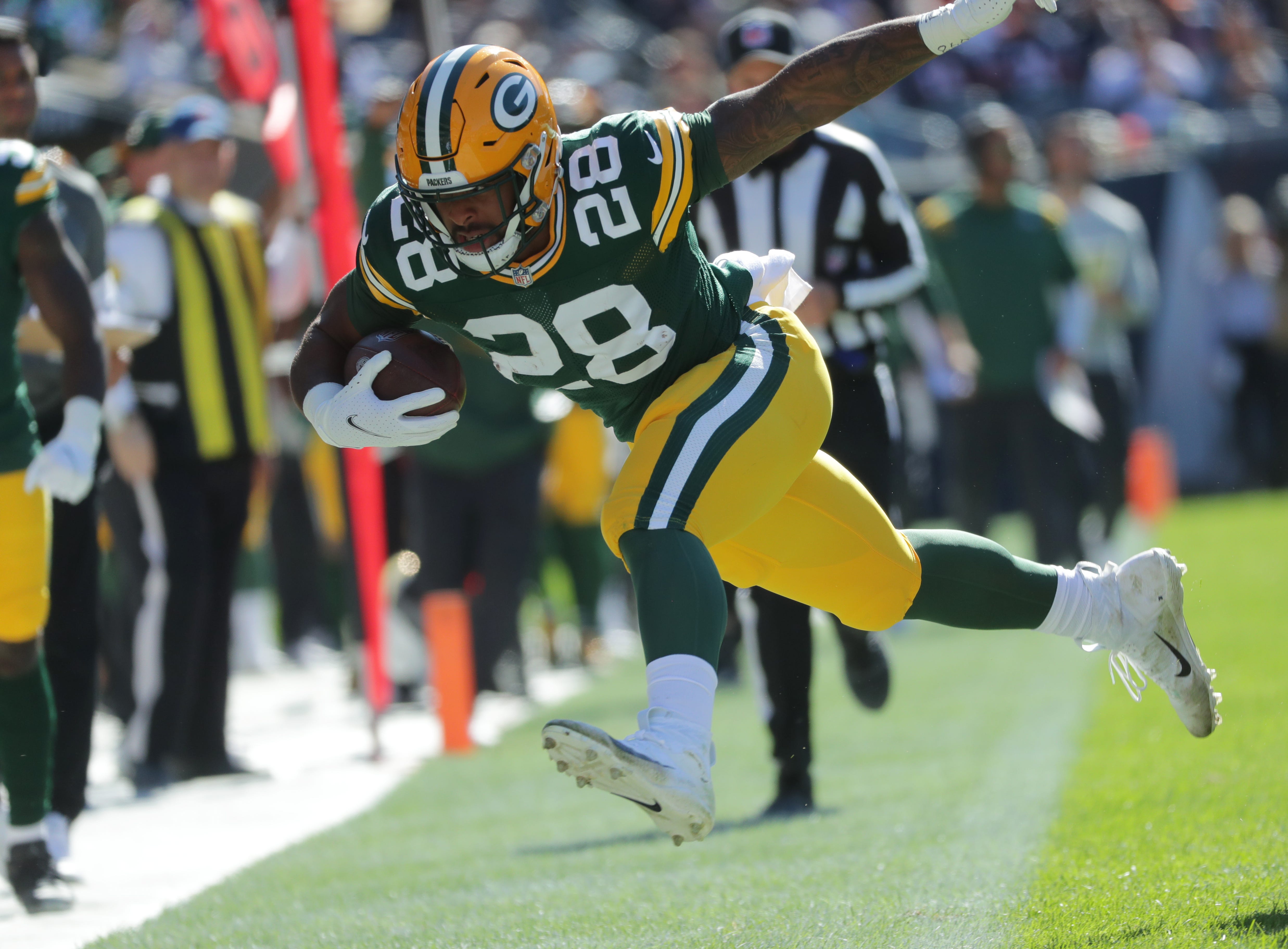 The Green Bay Packers got some good news earlier this week when they found out that running back Aaron Jones will miss only 1-2 weeks with a sprained knee. There was fear that the injury could have kept him out of the lineup for much longer.

But the Packers also know they have A.J. Dillon available to carry the load in Jones’ absence and that gives the team hope and comfort.

The assignment began for Dillon in the second half of the win over the Seahawks when Jones was injured and had to leave the game.

“When he first exited the game, he looked at me and said, ‘Get the job done, finish it off!’” Dillon told reporters after the Seahawks game.

Dillon took Jones’ request to heart and played a big part in the Packers eventually 17-0 victory. He finished the game with 128 total yards and two rushing touchdowns.

For the next few games, Dillon will be the Packers number one back with Patrick Taylor, recently activated to the active roster from the practice squad, expected to serve as his backup.

Dillon has been productive this season as the second back on the depth chart. He and Jones have split carries and they make a good tandem due to their contrasting running styles with Jones being a faster, outside threat and the 247-pound Dillon being a tougher, between-the-tackles kind of runner.

Through the first 10 games of the season, the former Boston College star has gained 421 yards on 97 carries and scored two touchdowns on the ground. He has also caught 16 passes for 196 yards and one score.

Dillon didn’t see much action in his rookie season as he was third on the depth chart behind Jones and Jamaal Williams. He also missed five games after coming down with Covid. He was the feature back in one game, the Packers 40-14 win over the Tennessee Titans in Green Bay in Week 16. In that game, Dillon showed what he could do, gaining 124 yards on 21 carries and scoring two touchdowns as the Packers won easily.

To his credit, Dillon has worked at improving his game since joining the Packers. He watched film from his rookie season and noticed some areas he could improve upon. “Looking at the tape from last year, a point of emphasis for me was really running below my pads, not running up so straight,” Dillon explained. “So, in those situations, having good pad level really helps, keeping your legs moving and stuff like that. But I also know I had a couple times where the big O-linemen were pushing me along, too. It’s always great when you’ve got their help.”

The progress in this area was obvious against Seattle where he scored two short-yardage touchdowns, one from three yards out and the other from the two-yard line.

Another area Dillon has improved upon has been his pass receiving. Despite his imposing size, Dillon has nimble moves for a receiver. He has 16 catches this season on just 18 targets for 196 yards. That’s a very respectable 12.3-yards per catch.

Perhaps the most impressive part of his receiving ability is that those catches were not just all swing passes out of the backfield. Dillon has shown the ability to run patterns downfield and make potential tacklers miss. That elusiveness was on full display during his 50-yard gain on a screen pass against Seattle where he juked two defenders near the sideline and turned what could have easily been a short gain into a 50-yard pickup.

“I always talk about being an APB – all-purpose back,” Dillon said. “I really want to be somebody reliable in every situation. So, I’ve just been working on it. I’ve got Aaron Jones to teach me a lot of the stuff he’s done so well in the pass game, so he’s really been teaching me a lot.”

Dillon’s teammates have noticed the work he’s put in to get better and the positive results he’s been getting as a result. “Very proud of him,” Rodgers said. “He’s a great kid. He works really hard. He’s improved in all the areas that he needed to become a complete back. And (he’s) smart, tough. He ran through unblocked guys on both of his touchdown runs, so, not much more you can say than that.”

Head coach Matt LaFleur has also noticed the difference in Dillon. “I think he’s done a much better job of learning how to run in his league, in terms of running behind his pads, lowering his pad level, really delivering the boom,” LaFleur said.

The Packers will be leaning on Dillon this Sunday in Minnesota when they face the Vikings. It’s a big game as a win could put the Packers in a commanding position in the NFC North as we head down the stretch.

Dillon feels ready for the moment. With Jones out for at least a game or two, the running game will primarily go through number 28. He’ll probably catch more passes as well as he replaces Jones’ large role as a receiver. At running back, Dillon is the next man up. When injuries hit, the Packers need players like Dillon to keep them on their path to the Super Bowl.