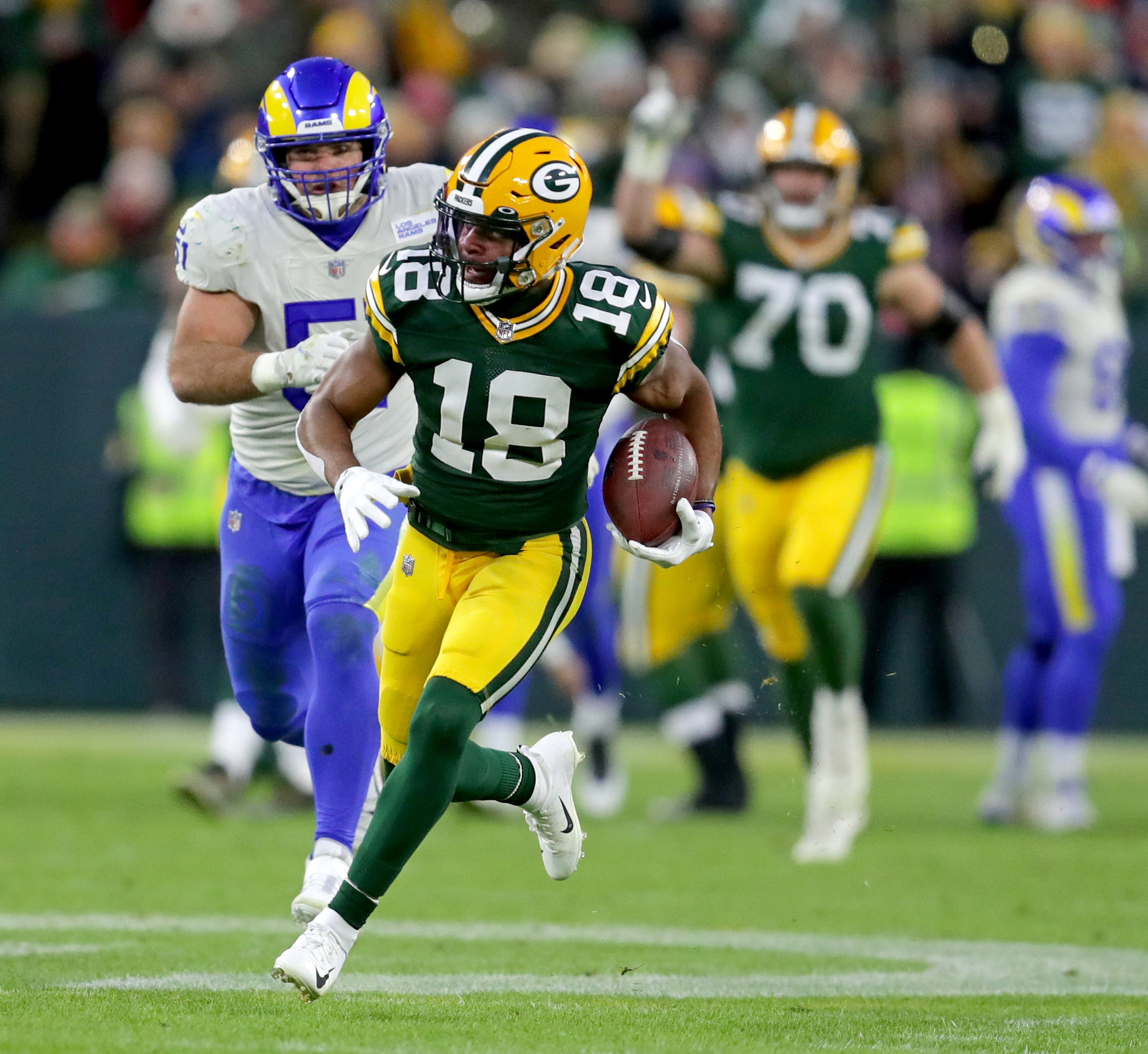 The Green Bay Packers got two touchdown passes and one rushing touchdown from Aaron Rodgers and a big pick six by Rasul Douglas to defeat the Los Angeles Rams 36-28 at Lambeau Field. The victory gives the Packers a big tie-breaking edge in the NFC and improves their record to 9-3 heading into their bye week.

With the win, the Packers are now 3.5 games ahead of the second-place Vikings in the NFC North with five games left on their schedule. They trail the Arizona Cardinals by a half game in the race for the top seed in the NFC with the Packers holding the tie-breaker because they defeated the Cardinals earlier this season.

Here are 10 things we learned from the Packers 36-28 win over the Rams:

It wasn’t always pretty, but it was effective. The Packers ran the ball 32 times against the Rams and although they only gained 92 yards for a 2.9-yard average per carry and their long run of the game was just eight yards, the running game did what it needed to do in this contest.

By running the football so often, the Packers slowed down the Rams dangerous pass rushers and kept the Los Angeles offense off the field.

The final time of possession numbers were 39:40 for the Packers and just 20:20 for the Rams. The Packers took an early lead and just kept the Rams defense off balance and made them respect the run throughout the game.

With Aaron Jones not at 100 percent, A.J. Dillon got the bulk of the work and he earned his yards the hard way, running up the middle and often pushing past defenders who got a free ride on his back as he kept moving forward.

The running game was a big part of the Packers success even though it didn’t break any big runs during the game.

OK, Ramsey wasn’t always matchup up with Adams, but Tae played well and came up with some big catches in this game and several of them came against the Rams Pro Bowl corner.

Adams finished with eight catches for 104 yards on the game and converted some key third downs for the Packers. His longest catch of the day was a 43-yard play that helped set up Randall Cobb’s touchdown catch in the second quarter.

Adams proved once again that he is an elite wide receiver and quite possibly the best wideout in the game today.

Rodgers was sacked only once in this game and that was for no loss of yardage as he tried to scramble for a gain and was caught from behind by Greg Gaines, the last player who had a chance to stop him from getting a key first down.

The offensive line’s performance is even more remarkable considering Rodgers was playing with an injured toe and didn’t have his full mobility.

By the end of the game, you could see Donald was frustrated by his lack of productivity and his team’s inability to get to the passer and slow down the Packers offense.

LaFleur came into this game with a smart game plan and he stuck to it as the players executed it well. He ran the ball often and featured quick release passes early. The success of those two facets of the game helped set up some longer pass attempts which the Packers were able to run without the pass rush getting to Rodgers.

The Rams have a strong defense but the Packers put up more points against them than any opponent they faced so far this season. That is a good sign heading into the bye week.

The Packers got Rashan Gary back in the lineup after he missed the Minnesota game with a hyperextended elbow. Gary continued to play well despite not being 100 percent and he was a difference maker again in this contest.

Gary had a big sack in the first quarter and forced a fumble that Preston Smith recovered. That set up the Packers first score of the day on Rodgers touchdown run.

Gary was also credited with two quarterback hits and several pressures. In his third season in the league, the former Michigan star has developed into a consistent pass rusher who can turn games around as he helped do early against the Rams.

When GM Brian Gutekunst signed Douglas off the Cardinals practice squad on October 2, it may have been the best mid-season signing in recent memory. Douglas had a huge play in this game, intercepting Matthew Stafford in the third quarter and running it back 33 yards for his first career pick-six which gave the Packers an unsurmountable 36-17 lead.

But that was not all Douglas did in this game. He broke up four passes, was in on five total tackles and even played on special teams.

Douglas has been a great find and the Packers secondary has played well despite missing Jaire Alexander since Week 4 and Kevin King on an intermittent basis all season. Douglas deserves credit for his role in stabilizing the Green Bay secondary.

The Packers had a few players who may not have made big headlines but were key contributors to the team’s victory. We can start with Yosh Nijman and the rest of the offensive line who controlled the line of scrimmage for most of the game and kept Rodgers upright.

Equanimeous St. Brown made two strong plays on special teams including downing a punt deep in Rams territory and caught a key third-down pass that kept the ball out of the Rams hands and ate up precious clock time in the fourth quarter.

Adrian Amos made a key stop on 4th-and-1 in the first quarter that prevented Darrell Henderson from keeping a Rams drive alive. He also recovered the onside kick at the end of the game to clinch the win for the Packers.

Linebacker Krys Barnes had a strong game as well, leading the team with nine total tackles, breaking up a pass and recovering a fumble.

The Packers much-maligned special teams had some good moments but also made their share of mistakes.

The good news: Mason Crosby made all three of his extra points and three field goals. But he also missed a 42-yard field goal off the goalposts and at least two of the kicks he made were dangerously close to hitting the uprights as well.

Cobb also muffed a punt return which set up the Rams at the Packers 25 but the defense stepped up and held the Rams to a field goal and the Packers still led 13-10.

The Packers coverage teams were better in this game but the mistakes the special teams units have been making continue to hurt this team.

The Packers defense has done a good job all season of limiting splash plays but against the Rams, they gave up several long passes.

Two of them were long scoring plays by the Rams including a 79-yard bomb early in the second quarter to Van Jefferson that got the Rams on the scoreboard. Then, early in the fourth quarter, Stafford found Odell Beckham, Jr. for a 54-yard scoring play that pulled the Rams to within 11 points at 36-25. Beckham was not much of a factor outside of that one big play.

The defense did do a good job of containing the Rams most dangerous receiver, Cooper Kupp who didn’t have a pass longer than 22 yards in the game.

The Packers have their bye this coming week after playing games 12 weeks in a row. The team is now 9-3 on the season and has a chance to get healthier with the week off.

The bye will give Rodgers a chance to rest his toe, Jones to fully recover from his knee injury and perhaps give the Packers a chance to get players like Bakhtiari, Za’Darius Smith and Alexander back in the lineup and ready for the playoffs.

If the Packers can get some or of all those players ready for the stretch drive, they can set themselves up to claim the top spot in the NFC and the first round bye that goes with it.