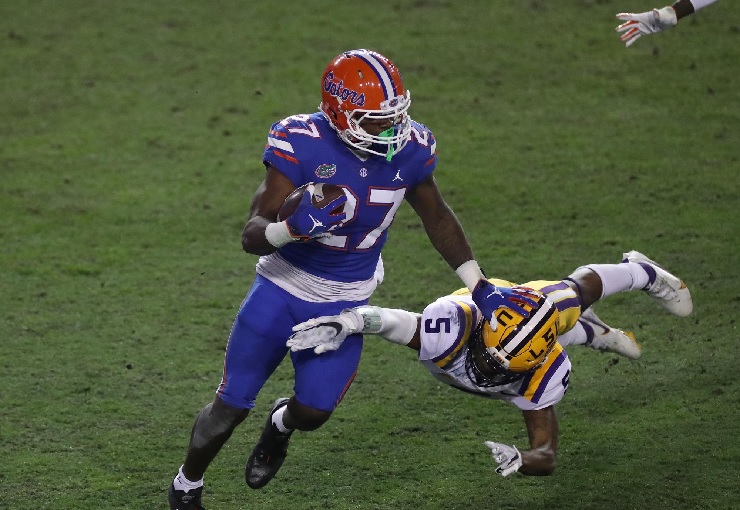 As March Madness is coming to a close the sports world is shifting more and more focus to the NFL draft. As such, I figured it was the perfect time to talk about five NFL prospects that aren’t getting the attention they deserve. In no particular order, be among the first fans to know about:

Gordon is not related to a Ramsey and he likely won’t have a career on par with either of theirs, but his skill is no joke. He played a lot of zone (specifically cover 3) opposite of McDuffie in college, and he showed himself to have a lot of potential. Similar to McDuffie, he was rarely targeted. Granted, the consistent cover 3 play-calling led to a lot of offenses focusing on the run, but being the strength of your defense is always impressive. Gordon is a bit more raw than McDuffie, but he is a fantastic talent than can be coached into having a special career.

Gordon would fit very well into heavy zone defenses looking for a Day 2 steal that rounds out their secondary, such as the Bills, Chargers, Bears, and Rams.

Metchie may be my favorite of the five NFL prospects. Immediately upon turning on his film the name “Davante Adams” came to mind, and I still think that is a fair comparison. Like Adams, Metchie isn’t particularly fast and doesn’t always set up his releases at full speed. Instead, Metchie takes his time setting up his routes and regularly cooks DB’s while executing them. There is cause for concern around his inconsistent hands, but such problems have been fixed before. Metchie has incredible upside and I wouldn’t be surprised to see him come off the board before pick 40.

Accepting the title of ‘Captain Obvious’, one of the most likely teams to take him are the Packers. They know what someone with his skill set is capable of. Other than them, the Jets, the Browns, the Colts and the Jaguars all stand out as great landing spots.

The biggest knock on Troy Andersen is his inexperience at the linebacker position. However, the reason for this isn’t a lack of playing time; quite the opposite, actually. Andersen is such a terrific athlete that he played QB, RB, LB, and even some S during his time in college. He is a tremendous athlete with raw skills all across the board, which means that he can play various roles in special packages while he grows his position IQ.

The two most natural fits for Andersen are two of the most historically creative teams in the league: the Ravens and the Saints. Other possible fits are the 49ers, the Dolphins, and the Chargers.

Shakir is another receiver that could be one of the best-known names in four years despite being left out of the conversation heading into the draft. Shakir is largely a slot guy with good routes, good speed, and toughness to his game. The concern here stems from his floor being low, but the reality is that his ceiling is close to Cooper Kupp. Quite a prize for a GM in the third or fourth round.

For the same reason that I pointed Metchie toward the Packers I am pointing Shakir toward the Rams. When you have a WR prototype that works, you try to emulate it. Other teams that make sense are the Chiefs, the Dolphins, the Packers, and the Commanders.

Pierce may be the furthest from getting the amount of attention that he deserves. He is an urgent and hungry runner that starts runs with good vision and ends them with nice moves and great speed. He has been left out of many of the RB conversations due to his low volume in college, but that low volume can be a great asset to his game. Getting Pierce late in the draft is like finding a 60-year-old sports car with 25,000 miles.

Absolutely anywhere that needs a running back or is okay with giving him the share of touches that he earns. Like North Carolina in March Madness, this will be a Cinderella story.

The Underappreciated Five, And More Football

These five NFL prospects will all soon be known to have been wildly underappreciated in this draft. Whether their career is similar to Taysom Hill or Frank Gore, a few lucky teams will be able to make themselves a part of these young men’s success stories.

To find more content on the draft and all things football check out our NFL homepage or some more of my articles by clicking on my bio. My analysis combined player film with combine results from nfl.com.